Dayton, OH – April 10, 2003 -- Profound Logic Software released a new version of RPGsp with major enhancements to both the Development Environment and Host Components. One of the most significant enhancements is the introduction of Wizards that automatically build browser applications based on the customer’s database layout. With wizards, developers can accomplish tasks up to 20 or more times faster than with traditional development techniques.

Developers can create HTML subfiles, inquiries, forms, and file maintenance applications in a matter of minutes. 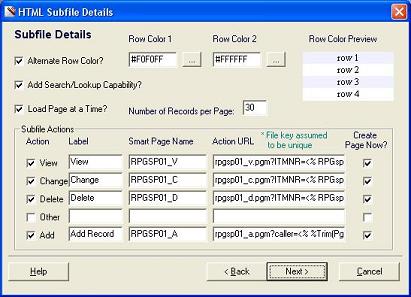 RPGsp Wizards are able to ask the developer a series of questions, and then generate either entire applications or just sections of code automatically, relieving the developer from laborious coding.

In future releases, Profound Logic plans to expand its wizards to use themes. Themes will allow RPGsp users to customize wizards through the use of template files.

Profound Logic Software is a leading provider of application development tools for the iSeries (AS/400) platform.

Profound Logic offers its software along with related training, consulting, and support services.

RPGsp is the first and only Web Development Environment based on native ILE RPG.

By integrating RPG business logic in an HTML interface, an RPG developer can produce powerful business applications faster than ever before.

RPGsp is analogous to web technologies such as ASP or JSP, apart from the fact that all host logic is written exclusively in RPG, the most natural and efficient language for accessing data on the iSeries.